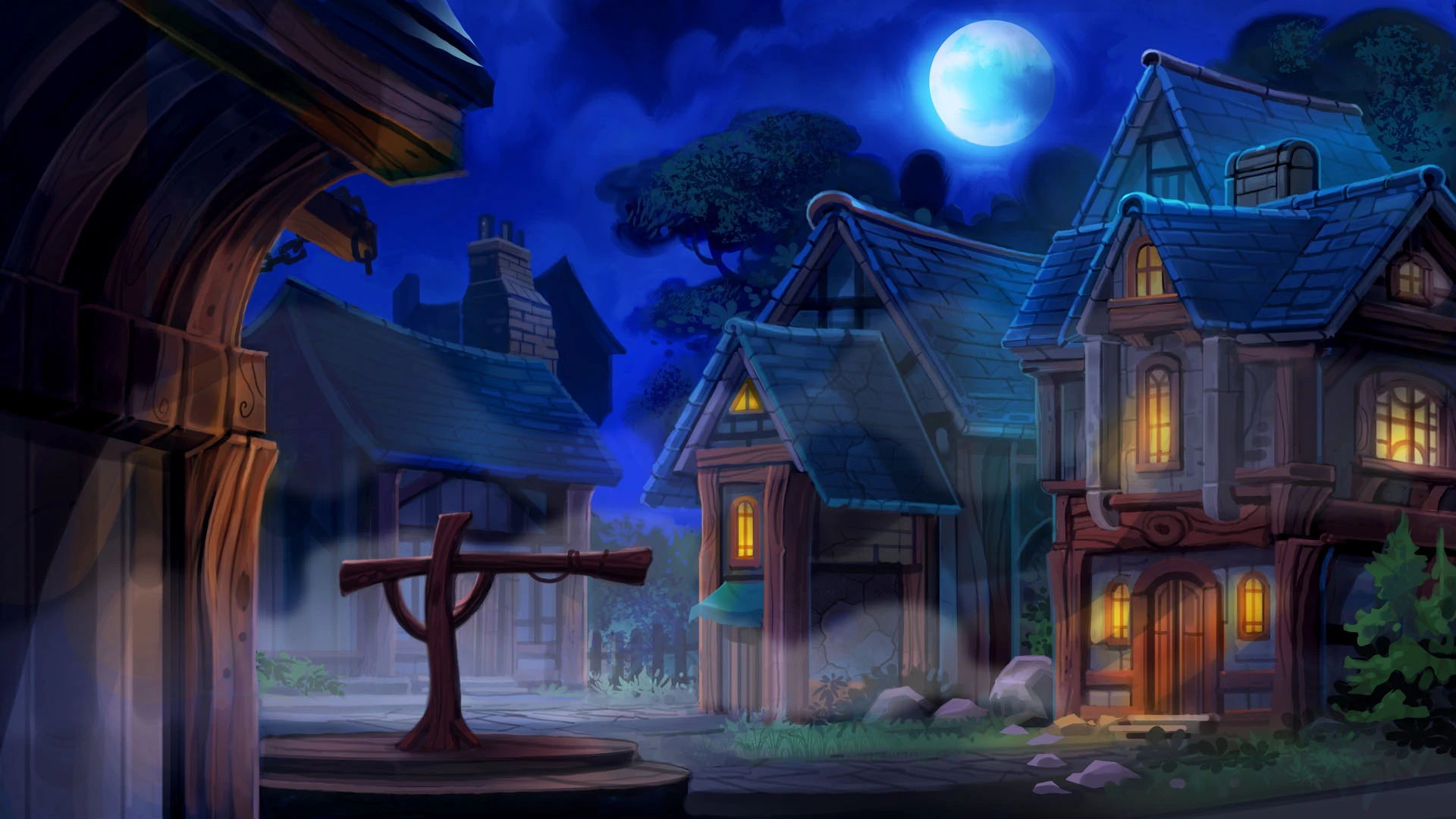 What's on your mind?

Apologies on the click-baity title, it's not quite 100% true. I logged on today and was prompted that I needed to buy an account before I could play. My account is grandfathered in and I was almost conned into buying the game when I didn't need to do so. I refreshed the page and was able to log on and play. If this glitch keeps occurring I ask that you please fix it, thanks!

I think getting rid of one of the RT’s and replacing it with a neutral begnine, Neutral chaos, another NK, or another mafia. I also think some town roles need nerfed, mostly TS.this game is very unbalanced and needs fixed.

What do you think could be a good balance?

I was playing a game of all any and i was amne. The GA asked to be lynched and we did. Then the GA revealed that there target also was an amne. That night both amnes remembered GA so i was a Ga with a GA target.

Lore: The Valor puts a finger to her lip, then points it towards a house. Silently, she walks over and investigates it while the person sleeps. She easily, yet gently, lifts a painting with her mighty strength. String tied to the pictures of her fellow Townies, sealed away under a painting, hastily scrawled ink over the various photos. Some are blank, while others have lists of professions. The Valor smiles, as she knows she’s protected the right person. She may not know who lives in the well-decorated shack, but she knows she’s made the right decision risking her life for them. The sheriff lives on.

Defense: None (While protecting a house) Basic (While at home)

Abilities: Protect one player’s house each night. While at the house, she will fight any visitors with the intention of hurting the player. The Valor will learn the role of the player they visit. The Valor may stay at their house once, and gain basic defense.

Mechanics: If a role with a different intention (e.g a Spy) visits the house, the Valor won’t know. If their house is visited while away, no information will be gained. However, while Valor has excellent battle strategy, she’s not quite as smart as the other roles. Valor sees the players come out of different houses than they do from the start, so finding out who’s who is a bit of a challenge. (Also, asking who comes out of what house is a dead giveaway for the Mafia to attack you.)

Wins with: All good roles

Loses with: Anything else

Consigliere: Your target has a desire to help people no matter the cost. They must be the Valor.

I was playing town traitor and got GodFather

N2-I told him he shouldn’t have claimed and just got lynched and Rick said I was an idiot... again

N6-TT BG isn’t hailed and we get a kill

N7- we attacked the retributionist

N8-one of them leaves and we kill the other

D10- mafia wins and Rick said that “Cotton, you’re the worst player ever, you have no skill and you only won because of jailor and lookout”

Can someone please explain how I was bad? 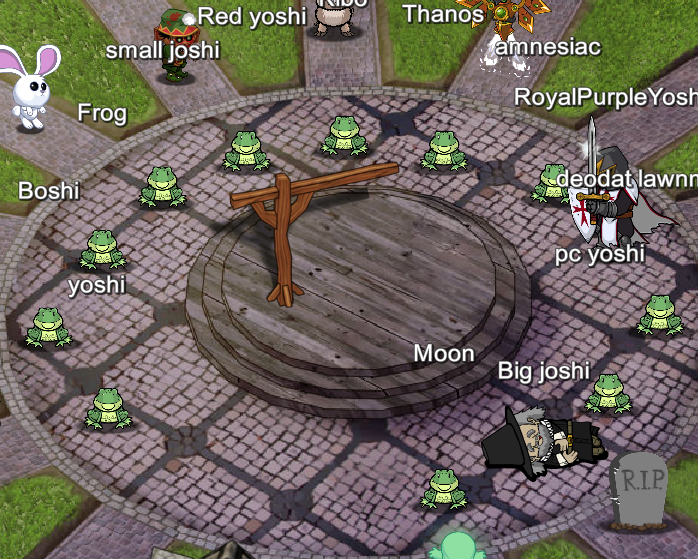 this is a series now deal with it

Downloading the Mobile app for Salem is practically a scam in turn for you too simply download it to realize you still have to pay. The fricken pay wall is INSIDE the game not on the app store where it should be. It specifically states it's free when that's an obvious lie. I know nothing about this game at all but that's ridiculous.

Lets Thank all of the dads that do so much to help us!

In the game (mobile) there is a bug that the music and sound wasn’t being played even though that I had it on and my volume was all the way up.

I feel like i’m over active and it’s awkward here but I was playing earlier and lost my connection, also loosing my friends in the process. So, anyone who can help me, do you know who are these people? Queen rat and rat servent? I really want to meet up with them yet I don’t have their users. If anyone does, tell them my user is minervaaa0, I was rat lady, the girl who accidentally confessed they were exe to their target 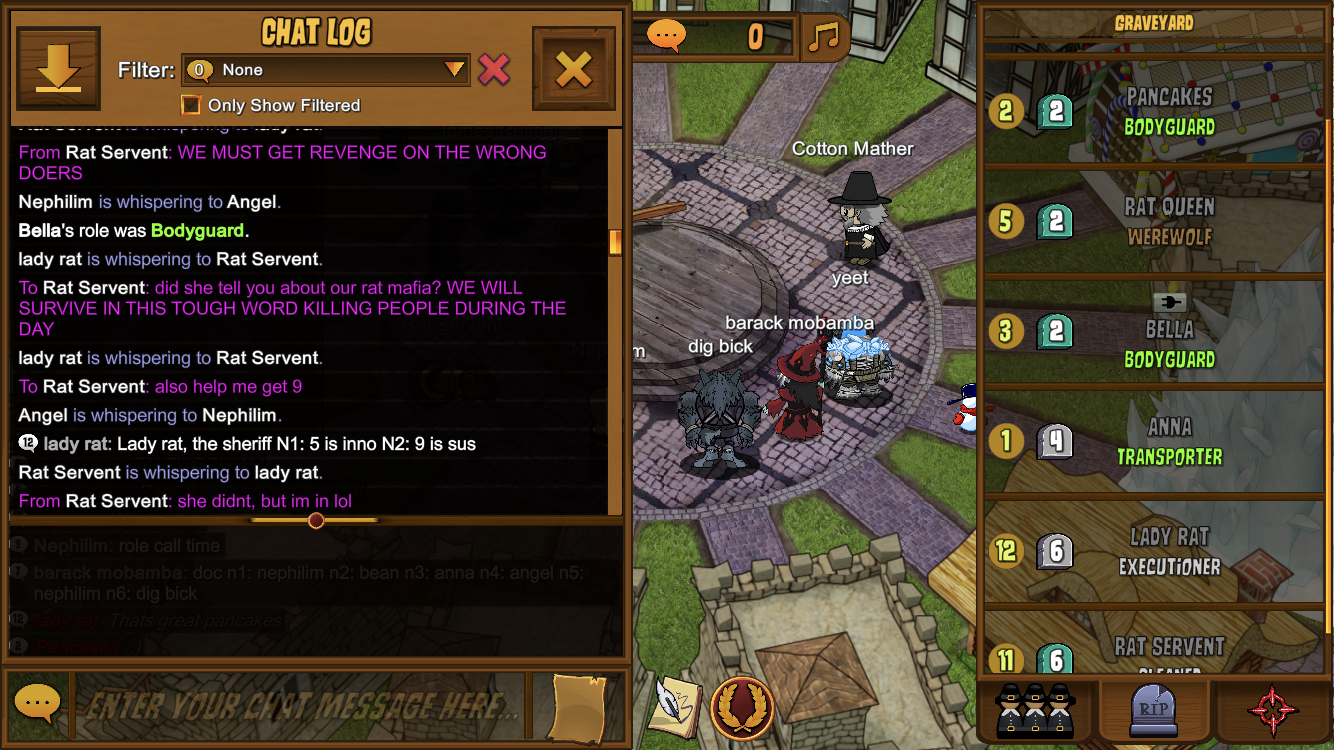 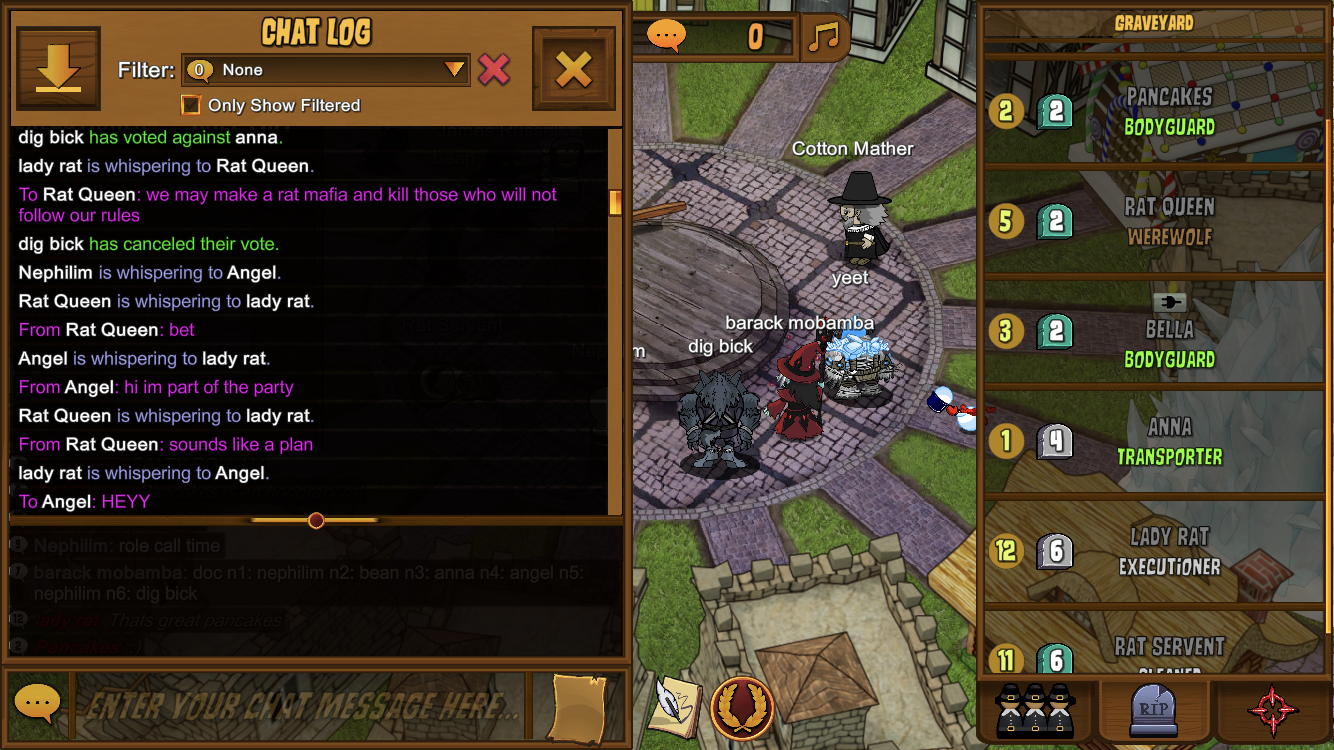 I JUST- the reason I love all any is because its always random, BUT THIS WAS ANOTHER LEVEL OF RANDOM WE HAD A FREE WIN 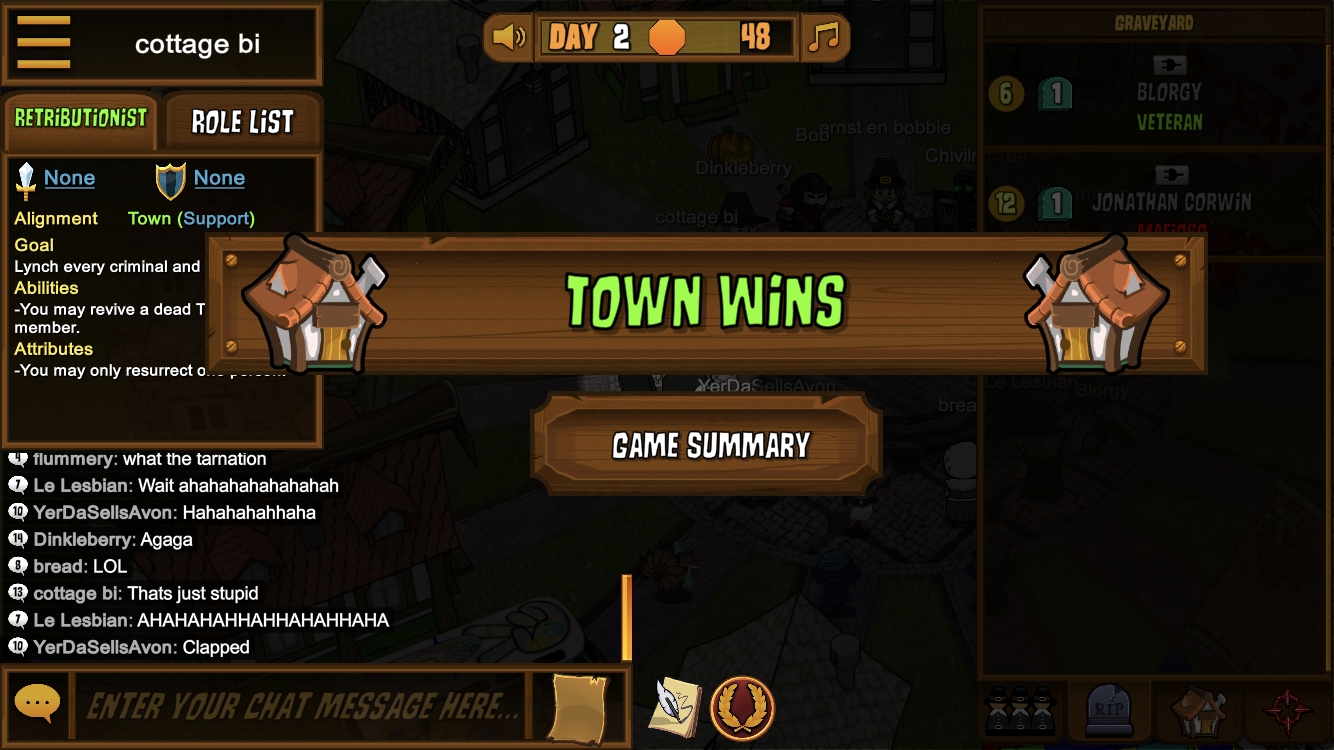 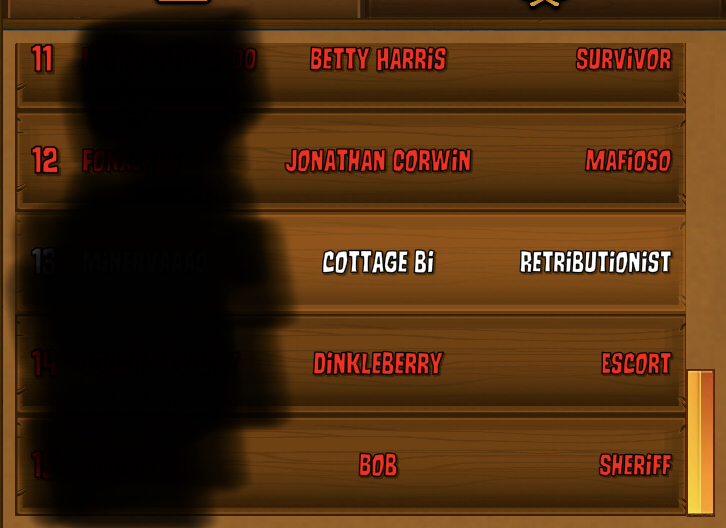 That mafioso was THE ONLY mafia we had, no werewolf, no serial killer, no vampires. Just jester, exe and mafioso. That happened literally 2 minutes ago and it was such a glorious win

Summary-You are a Fairy banished from your town seeking revenge.

On even nights you may Screech at a home

Screech: You screech at a house Making everyone who visits the target unable to see Whispers or whisper

On odd nights you can kill one person

The death message is

On odd nights they come up sus

On even nights they come up inno

Your target could be a

Summary - You are a powerful Avatar, capable of bending multiple elements.

- Use one element every night to cast either an attack or status effect on your target.

- You may only use every element once.

- With the necromonicon, you have unlimited element usage.

Fire: (Attack) With fire, you can cast a powerful attack on a player at night. Attack has a 2 night CD. (Effect) Gives player the “Burnt” status effect.

Burnt: Causes player to frequently light on fire. If the player visits someone who is doused or hexed, they will instantly be attacked with an unstoppable attack. Can be healed by a doctor.

Wet: After being drenched in water, you feel more open to attacks, distracted by the water constantly. Lowers defense value by one every even night (doesn't stack). Also cleans gas. Lasts for 2 nights. Can be healed.

Imbalanced: Your soul is unbalanced with nature, causing your soul to blink in and out of reality. Every night, receive a random harmful status effect (Doused, Hexed, etc). The effect only lasts for one night. Doesn't include poisoned. Can be healed.

Windy: The air around you is so strong, it sends everyone away from you. This effect sends anyone who visits you to another player. Lasts for 2 days. Windy does not affect the coven.

Lore: None yet, making a certain story with all of my new roles without a story.

Win 1 game as an Avatar.

The Master Of All

Win 5 games as an Avatar.

Inflict a status effect onto yourself.

Inflict the “Windy” status effect on a mayor and kill them afterwards. 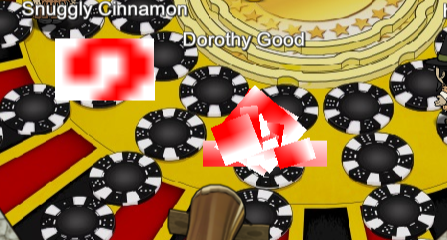