View source
watch 01:01
Who is the Bodyguard?
Do you like this video?
Play Sound 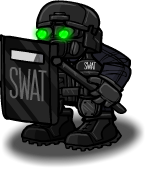 Attack: Powerful
Defense: None (Basic when using a bulletproof vest)

Classic Results
Your target could be a Bodyguard, Godfather, or Arsonist.

Your target is a trained protector. They must be a Bodyguard.

You are an ex-soldier who secretly makes a living by selling protection.

Protect a player from direct attacks at night.

If your target is directly attacked or is the victim of a harmful visit, you and the visitor will fight.

If you successfully protect someone you can still be Healed.

A young man, ex-military, dressed in black, patrols the houses of the town at night. Struggling to make a living, he decided that he could make money protecting others. Knowing that anyone, and anything could be lurking in the night, he could use his skill from battle to protect the town members.

The job paid well, so well that the Mayor offered to pay him personally for protection, and so far, nobody he protected had been attacked. But one fateful night, seemingly so much like every other night he had experienced, would be his last.

It was 1:00 in the morning, and he was standing by the Mayor's house, listening and watching for any strange occurrences. Suddenly, he heard a bang - the door of the Mayor's house had been forced open. The Bodyguard sprinted into action. He turned the corner into the house, loaded his own gun, and yelled, “Freeze!” at the Mafioso bolting into the Mayor's study. The Mafioso had no choice: he turned around and unloaded his machine gun, fatally wounding the Bodyguard. But as the loyal guardsman crumpled in pain, he shot the Mafioso three times, killing him before he hit the floor.

The Bodyguard knew he would die, as there was no Doctor to be seen. But despite his fate, he had saved a fellow Town member from the Mafia. He had finally done his job. He closed his eyes, smiled wistfully, and passed into eternity. (credit)

Why did my target still die?