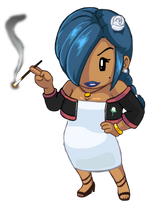 Investigator Results
Your target could be an Escort, Transporter, Consort, or Hypnotist.

Your target is a beautiful person working for the Mafia. They must be a Consort.

You are a beautiful dancer working for organized crime.

Distract someone each night.

Distraction blocks your target from using their role's night ability.
If there are no kill capable Mafia roles left you will become a Mafioso.
You can talk with the other Mafia at night.

Kill anyone that will not submit to the Mafia.
No one should have to manipulate people on the whim of a higher power, but then again, no one would want to, either. A beautiful and unfortunate young woman had lost everything. She had nothing - no job, no home, no family or friends to turn to, not even hope - but eventually found salvation in the world of organized crime. Though reluctant, the Consort felt she was a respected member of the Mafia. Unknown to her, she was just being used as the Mafia's residential Femme Fatale. Much to the Consort's chagrin, her role in the Mafia stuck with her, and she was too far into the whole ordeal to back out. As the sands of time flew forth, the Consort began to embrace her position, and, over time, executed her missions with confidence, tact, and prestige. In the end, she had it all: respect, power, and most importantly, the love and trust of the Godfather. All she had left to fear in the world was the pedestal upon which her own execution could commence, and the cold blade of a Serial Killer. (credit)