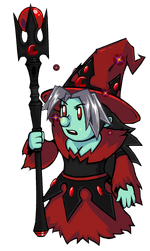 Coven Chat
Unique Role
Will inherit the Necronomicon on Night 3

With the Necronomicon:
Attack and use ability of controlled target on second target

Your target could be a Lookout, Forger, Juggernaut, or Coven Leader.

Your target leads the mystical. They must be the Coven Leader.

You are a voodoo master who can control other peoples actions.

You may choose to Control someone each night.

Your victim will know they are being controlled.
With the Necronomicon, your victim is dealt a Basic attack and you gain Basic defense.
You will know the role of the player you control.

Kill all who would oppose the Coven.
I've always had... strange powers. I've never known why. Ever since I could remember, maybe my mom dropped me as a child or something, but I've always had something... "quirky" about me. When I was a child, odd little quirks would occur. Like things falling from where they were hung, ancient chanting faintly whispered. Things you, couldn't explain.

Although the one thing that had always been known, and never changed. My eyes were very alluring. I could control things, see into their thoughts, get them to do whatever I wanted. I was like a ghost. A ghost who could watch your every move, grinning behind you, making you do things against your will. I guess it didn’t help with how mischievous I was all the time. Pulling pranks, stirring up dark things. Then, I snapped though. Something… changed. I went into a much darker tone, more analytical, and more… sinister.

Perhaps it’s when I met a woman in the streets, selling items that swirled in a glass vial, then being rejected. Perhaps it’s when I saw a young girl, being attacked, to only turn the attackers to stone. Perhaps, it was when I saw a man poison his lover in cold blood. Maybe it was when I saw a dark shadow slowly bring the dead to life, to use to kill a man. Or maybe it was when I was struggling to even live. Whatever might have been the trigger, that’s when my life turned to what I do now. Controlling people. At first, it was only to live, to strive. Then, it became an addiction, as I used it for more sadistic use...

Perhaps that was the turning point. Finally, I decided to... stir something up. Those "rejects" I saw on the streets, scraping by like me. Maybe, just maybe, we could live together in comfort. Making everyone live like we did. So, I created the coven. Salem was always a troublesome place, so why not have some fun? (credit)

Second target: The controlled player will use their Night ability on the second target if the control is successful.

, then a Lookout can see the first target visit the second target, even if the visit does nothing.

, then the first target can be controlled and can be attacked by visiting a Veteran who is on alert as the second target.

, then the first target can be controlled and can be attacked by a Werewolf who is the second target during a Full Moon Night (Visiting Medusa or Pestilence applies the same way).