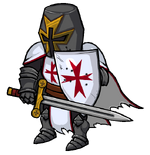 Protect target and attack one visitor

Your target is a divine protector. They must be a Crusader.

You are a divine protector whose skills in combat are unmatched.

Protect one person during the night.

Grant your target Powerful defense
You will know if your target is attacked.
You attack one person who visits your target on the same night.
You do not attack vampires, but you do block their attacks.

Until a few nights ago, the Crusader was always willing to sacrifice his life for that of another townie. It was a noble deed, and it was the Bodyguard's job. But one night, while on guard, it occurred to him that if he just shot the visitor before they attacked, he could protect whomever he was supposed to protect, and live!

So the Crusader stood, daring anyone to try and attack this house. He was on a mission, not just to protect the owner of this house, but to get rid of all evil in this town. He would save the town, and survive to become a celebrated hero at the end. As he began to think this night would be as uneventful as all the other nights, he heard soft footsteps.

Three clean shots stopped the serial killer’s reign of terror. As the Crusader kicked the body over, knives glinted in the moonlight.

Hearing gunshots from the home he planned to visit, the mafioso, lurking not too far away, turned back home. The Godfather would be angry, but a mad Godfather was better than a dead mafioso.

Morning came, and the joyful Crusader practically skipped to the town square where dead would be announced. As the townies woke up, they stared at each other, observing who was absent. The Mayor called for everyone’s attention as the Sheriff dragged a body out in the middle of the square. It was the serial killer, the one the Crusader had killed last night.

“This townie was killed by a Crusader last night,” the Sheriff stated. The townies pointed to a shabby house, identifying it as the dead person's house. The Sheriff and the Investigator entered the house. The Crusader tensed in anticipation. In a few seconds, they would announce that the serial killer was dead.

It was only when the Sheriff raised his head, his grim demeanor becoming visible, that the Crusader realized he had made a grave mistake. The Investigator held up a box of medicines for the town to see. As the Crusader heard the Investigator’s quietly uttered words, he fell to his knees in shock and horror.