Friends are a feature in Town of Salem. It gives you the opportunity to add players to your own party and enter a game together, as well as send private messages.

The friends list can be brought up in the main menu.

How to add a friend

Players can have up to 500 friends.

Messages will appear as a notification. Upon logging out, any and all messages are removed and these conversations cannot be recovered. In addition, if a player is not online or is not at the home screen, they will not be able to receive messages. BlankMediaGames plans to change this, though there is no set date as to when this change will occur. If a friend goes offline as you are chatting, you will still be unable to send them messages.

Beside your friend's name, there will be a circle with varying colors. The color of the light depends on whether your friend is present or not.

If your friend owns the Coven Expansion, they will have a red moon around their circle.

Parties allow friends to chat and enter a game together.

The Host is marked with a

crown at the start of their name. The Host can invite people to their party,

kick people in their party.

People with invite powers have a

arrow at the start of their name. They can invite people.

If a player owns the Coven Expansion and opens up a Coven party, they can invite players with Coven to join. Should you attempt to invite a player who does not own it, a special message next to the player (who does not own Coven) will appear and say "No Coven." The player you tried to invite does not receive a message telling them that they were invited.

How to Create a Party

Rewards for being referred

For more information, view the official Town of Salem forums. 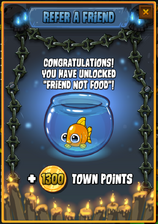 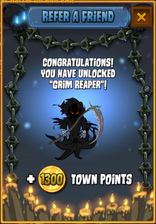 Before receiving codes, premium players must first agree to the terms that their "account may be suspended if a referred user is banned during their trial period".

Community content is available under CC-BY-SA unless otherwise noted.
Advertisement