Edit
watch 02:26
Who is the Godfather?
Do you like this video?
Play Sound 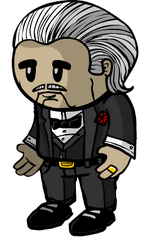 Order Mafioso to attack your target. If there is no Mafioso, you will attack the target.

Let Mafioso attack their own target. If there is no Mafioso, nothing happens.

Classic Results
Your target could be a Bodyguard, Godfather, or Arsonist.

Your target is the leader of the Mafia. They must be the Godfather.

You are the leader of organized crime.

You may choose to attack a player each night.

If there is a Mafioso he will attack the target instead of you.
You will appear to be innocent to the Sheriff.
You can talk with the other Mafia at night.

The Godfather leans back in his chair, a cigar puffing out amongst his accomplices. "So? Any idea who should fall tonight?" The Consigliere speaks up. "The man on 5th Avenue, the one with the limp. He's our Investigator. He's the one we should take out." The Godfather nods his head slowly, and then glances towards the two men sitting on his right. One's hands are scarred, burned by the acid he uses. The other has a revolver strapped to his waist. Both men glance at each other, and then look back towards the Godfather. "Then it's done," the Godfather says, removing the cigar from his mouth and pressing its end into a small portrait of the Investigator. He spends the rest of the night brooding over the table of the remaining portraits. Suddenly, a knock is heard at his door. He stands up, covering the portraits and paperwork. He opens the door, and there stands the Sheriff. Known as a well established businessman, he answers the sheriff's probing questions, shakes his hand and sends him on his way. As he goes back to his chair, gunshots ring out at 5th Avenue, and a satisfied smile spreads across the Godfather's face. (credit)

As the leader of the Mafia, it is important for you to give orders to the Mafia and to make the most use out of all of their abilities. It is also important to listen to the other members of the Mafia and make use of any information that they give you.

Dealing with an Investigator: If you are concerned that you may be visited by an Investigator, claim Bodyguard when pressed to claim a result, since that is the only Town role in your investigative results, and it is very hard to disprove. You can even claim to have used your bulletproof vest if someone calls you out as having a higher defense value than their attack value. Of course, Bodyguard isn't always the most plausible claim. but if you were investigated, it is the only thing you can do. If there is an Arsonist or you are playing All Any, claim you might be doused.

Dealing with a Sheriff: A Sheriff cannot see you as a member of the Mafia, but they might call you out to the Town seeming innocent. You should claim any Town role or any role with Detection Immunity (Neutral Benigns are the best choice if you can't claim a Town role). After that, make up a fake yet well-written Last Will if needed. However, if there is evidence mounting against you, (e.g. if the Lookout saw you at a dead player's house without a Disguiser), there is little you can do.

Dealing with the Jailor: Like all evil roles, you should have a claim ready for, if and when you are jailed.

Dealing with the Mayor: Once a Mayor has been revealed, it's a war between you and him in terms of commanding your faction, as both of you are the leader of your respective alignments. Being the Godfather , you know the identity of all the fellow members of the Mafia and can easily communicate with them at night. However, the Mayor faces many difficulties related to these two aspects due to his inability to send or receive whispers and the lack of privacy from belligerent roles during the day. These are the Mayor's biggest pitfalls, which you can use to your advantage.

Trying to kill the Mayor immediately after they've revealed is risky, as a Bodyguard could be protecting them. However, Blackmailers are completely unaffected by Bodyguards. A blackmailed Mayor is unable to reason with Neutral roles, instruct other Townies, or reply to them. Thus, the blackmailed Mayor is effectively stripped of all his powers except for the triple vote he has. This tactic has its flaws, too. However, as the Mayor could be protected by a Jailor or Transporter. A Lookout will be able to call out your Blackmailer if they are present but this gives you some opportunity. If you have a Disguiser, you can tell them to Disguise the Blackmailer to deceive the Lookout into lynching a Townie.

In the Coven Expansion, a Crusader can protect the Mayor and kill your Blackmailer or Mafioso, and prevent your attack, so target them first.

Dealing with a Survivor: You can whisper and try to convince them that the Mafia has a better chance of winning than the Town. In return, you can promise that you will not attack them. In the best case, the Survivor will help you lynch the Town or Neutral Killing roles in late game; in the worst scenario, they will simply rat you out to the next Townie they see.

Dealing with a Witch: The Mafia can win with Witches and it is very common for them to work together, but an ill-informed Witch can cause serious problems for you. If you or a member of the Mafia are repeatedly being controlled by the Witch, it may be a good time to identify the Witch as quickly as possible as they could make you kill your members of the Mafia.

Dealing with a Coven Leader: The Coven Leader is a big danger to the Mafia as they can make you kill members of the Mafia or make you or your Mafioso visit the Medusa. Before night 3, you can kill the Coven Leader before they gain their defense, so target them early.

Dealing with a Medusa: You can kill her at the right time when she doesn't use her Stone Gaze. Your Consort can also role-block her, allowing you to kill her safely; unlike the Veteran, the Medusa is not immune to being role-blocked.

Dealing with a Necromancer: The threat the Necromancer presents depends on what is in the graveyard. To mitigate the threat, use the Janitor and the Forger to thwart their kill potential. You can also have the Forger forge a killing role as a Town Protective role to trick them into killing members of the Coven.

Dealing with a Potion Master: Unlike the other Coven, the Potion Master is less of a threat and more of a nuisance, as like a Doctor, they can prevent your attacks from killing members of the Coven, and like the Consigliere, they can directly find the mafia even if Doused. If you suspect that a Potion Master healed the target you attacked, attack them again. Since the Potion Master usually has a 3-day cooldown between potions, you can kill your original target without much interruption.

Dealing with a Poisoner: Generally speaking, if there's a Doctor in the game, the Poisoner is virtually a non-threat to the Mafia as the Poisoner serves as a mere distraction for the Doctor as you kill higher priority targets. If someone claims Poisoned on the same night the Poisoner died, tell the Ambusher to target them.

Dealing with a Rogue Neutral: Sometimes Serial Killers, Arsonists, the Werewolf and the Juggernaut will admit that they are a Neutral Killing role, recognizing they're going to lose, and instead side with the Town, meaning they will only attack players the Town tells them to. Essentially, it is considered gamethrowing to help the Town win, and they will target you and members of the Mafia first. Although this is challenging to counter, since it deals with fighting someone suicidal, there are several ways to keep your team intact. If you have a Blackmailer, you should obviously continue to blackmail that killer and convince the Town to hang them. If you have a Consort, you can role block an Arsonist or Juggernaut constantly. It is also possible to simply remind the Town that they are gamethrowing by not hanging an enemy.

In Conjunction with Mafia Roles[]

While it may be tempting to micromanage the Mafia and give orders to everyone, it is generally smart to listen to your members for advice and info before giving orders to the members in your faction: