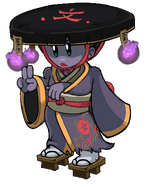 Your target could be a Framer, Vampire, Jester, or Hex Master.

Your target is versed in the ways of hexes. They must be the Hex Master.

You are a spell slinger with a proficiency for hexes and curses.

You may choose to Hex a player each night.

With the Necronomicon you gain Astral and Basic attacks.

Players are still Hexed when you have the Necronomicon.

Kill all who would oppose the Coven.
When the Hex Master was a child, her grandmother was burned at the stake on suspicion of witchcraft. As her belongings were being confiscated, one object caught the Hex Master's attention. It was a worn out book. Skimming through it, she could tell it was in her grandmother's handwriting. It was a guide on curses!

Something awakened in her that day. Exploring the book became an obsession, consuming every aspect of her life. The townspeople's jeering of her seclusion only added fuel to her passion.

Only one entry in the book eluded her powers. A hex of mass destruction. Every night she sneaked to her grandmother's tombstone to attempt the curse. She knew of another sorceress who practiced at the cemetery, but she felt performing the spell at her grandmother's grave was the only way she'd ever successfully complete it.

The spell fizzled into dust. The rats' beady eyes felt as if they were taunting her. A fresh wave of grievance came over her. She grabbed one of the rats and flung it across the clearing.

It landed by the grave the Necromancer was reanimating, disrupting her concentration. Startled, she moved to where the Hex Master was working. The Necromancer watched as she raised a hand towards her furry subject and recited an incantation towards a rat. She meticulously went through this process for each one.

Upon hexing the final rat, strength began to flow through her fingers. It manifested itself as a soft purple glow. It slowly evolved to a large flame on her palm. Her hand recoiled slightly, and the flame trembled. She calmed it back to rest in the middle of her palm. Moments later, the group of rodents' hair collectively stood on end. She took a deep breath and snapped her fingers. The blaze instantly left her hand and engulfed the rats, erasing them from existence.

The Necromancer made a noise of surprise and stepped out from behind her cover. "Who are you?"

She rose from the cold dirt and turned to face the Necromancer, who stared at the ashes in disbelief.

Her devilish smile accurately conveyed the joy she felt finally executing this curse.

The Hex Master is a role with the ability to Hex one player each night. When all the non-Coven players left alive have been Hexed, all Hexed players will die in an Unstoppable Attack.