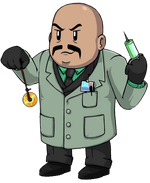 Investigator Results
Your target could be an Escort, Consort, Transporter, or Hypnotist.

Your target is skilled at disrupting others. They must be a Hypnotist.

You are a skilled hypnotist who can alter the perception of others.

You may sneak into a players house at night and plant a memory.

A planted memory will confuse the player.
If there are no kill capable Mafia roles left you will become a Mafioso.

“The human mind is very… complicated, is it not?” a voice asked from the shadows of the room.

“What do you want from me?” the man in the chair yelled, soaked in sweat, with blood running down his cheek.

The shadowy figure emerged and wiped off the blood. It’s always important to make sure the client is relaxed before commencing with the process. The figure shushed the man in the chair.

“Everything will be okay.” the figure proclaimed.

“Everything will be okay.” the man replied before being sent off to the dream world.

The hypnotist snapped out of this side of himself. Turns out that if you know the right people, a degree in psychology can pay extremely well.

He went to the nearby Consigliere.

“Ya sure it was the blonde guy on the corner that killed Tommy?”

“Sure as I’ll ever be.” she replied, wiping the Sheriff’s blood off the rusted hammer.

The hypnotist returned to the Sheriff in the chair and gave him a firm slap across the jaw. He fell back into his medical side. This was so much more fun than working with those crazies in the asylum.

“Do you know that blonde man who lives three houses away from you?”

“He is a very bad man. He tried to hurt you tonight.”

The hypnotist knew that this was working. He was just thinking about how fun this would be to do on the Mayor. All that power manipulated with a few simple words.

He took out his pocket watch and let it swing in front of the man's face.

“But we protected you. He tried to hurt you but we saved you.”

“You protected me and he tried to hurt me. I will tell the town and stop the man from hurting anyone else.”

The man silently took the Sheriff back to his house to sleep. The man knew who would hang tomorrow. The Godfather would be very pleased. (credit)