View source
watch 02:31
Who is the Investigator?
Do you like this video?
Play Sound 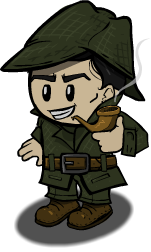 Classic Results
Your target could be an Investigator, Consigliere, or Mayor.

Your target gathers information about people. They must be an Investigator.

You are a private eye who secretly gathers information.

Investigate one person each night for a clue to their role.

Working as an undercover genius underneath the Sheriff, the Investigator sets off on his quest to bring the Mafia and the Serial Killer to justice. Hiding behind a mask and large fedora, he searches the night for clues towards the end of the dark days. Alone, just like how he's always preferred.

However, it seems that his time was short lived, for he never had enough evidence to convict the town Doctor of being the Serial Killer.

He had, last night, spied a large knife left all on its lonesome, on a worn wooden workbench. The Janitor had cleaned up so many bodies that he had no idea if the Serial Killer was dead or not. Eventually, he went in with all guns blazing, putting his luck on the line, accusing the Doctor of being a Serial Killer, to no avail. They lynched him, and the Investigator was surprisingly quiet after that. (credit)

When investigating someone, the Investigator receives a message which includes a target's possible roles. Below lists the possible investigative results in the game (in both Classic and the Coven Expansion).

NOTE: For a simpler, more copy-paste friendly version of the tables below, click here (Classic) or here (Coven Expansion).

Surviving as an Investigator

Community content is available under CC-BY-SA unless otherwise noted.
Advertisement