View source
watch 02:47
Who is the Jailor?
Do you like this video?
Play Sound 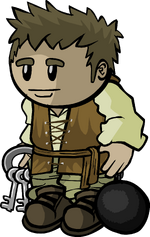 Select a target to jail for the night

Classic Results
Your target could be a Spy, Blackmailer, or Jailor.

Coven Expansion Results
Your target could be a Spy, Blackmailer, Jailor, or Guardian Angel.

Your target detains people at night. They must be a Jailor.

You are a prison guard who secretly detains suspects.

You may choose one person during the day to Jail for the night.

You may anonymously talk with your prisoner.
You can choose to attack your prisoner.
The jailed target can't perform their night ability.
If you execute a Town member, you forfeit further executions.

The sun had set already. The people of the Town moved along the paths and streets of a lamp-lit Salem after the town's afternoon meeting. One figure, his hand moving to turn the doorknob to his house, had suddenly found himself in a blindfold and handcuffs. With no chance of resistance, he was hauled away under the cover of darkness. He would not be in his bed that night, nor out doing his duty. Instead, he would find himself tossed into a pitiful jail cell. Stone walls, a small cot, and a bucket were the only material inside.

After a long and dreadful wait, the barred window of the cell's only metal door let through a voice in a sovereign tone. "What is your role in this mess?" The figure, alone in the cell, sweats and looks from the cell door back up towards the bars. The voice sounds again, compelling and potent in its ultimatum, "Make your claim, or you will die here."

Handcuffed and nervous, he calls out, "I-I'm the Doctor! I was only trying to help someone!" It didn't work. He could hear the sound of a gun being taken out of its holster. The sovereign voice of the Jailor sounds again. "...I had a visit from the Doc' yesterday." The door opens. A pistol points at the cuffed figure inside the cell.

Jail a target for the upcoming Night by clicking on the "

Jail" button next to the player's names on the player list during the Day.

Execute your prisoner by using the Night ability button. You have three executions.

You shouldn't kill all of these claims since you only have 3 executions, but if someone claims one of these roles, keep an eye on them throughout the game.