Edit
watch 01:13
Who is the Janitor?
Do you like this video?
Play Sound 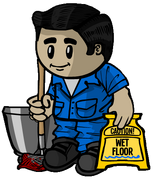 Classic Results
Your target could be a Medium, Janitor, or Retributionist.

Coven Expansion Results
Your target could be a Medium, Janitor, Retributionist, Necromancer, or Trapper.

Your target cleans up dead bodies. They must be a Janitor.

You are a sanitation expert working for organized crime.

Choose a person to clean at night.

Kill anyone that will not submit to the Mafia.
The Janitor is just a lowly schoolhouse custodian. He takes the abuse of the townspeople's children, the taunts and the bullying. The Janitor is used to it. Any scrap of food left on the cafeteria table is slipped into his pocket, for his pay is meager, and food is a necessity of life, is it not? This has been his life for as long as he can remember. But, as he lies in bed one night, contemplating what he shall do, his door is broken in half. In walks a large and rather intimidating man. He soon realizes he is The Godfather. Fearing for his life, he begs for mercy. The Godfather only laughs, until he realizes who he is going to kill. A plan forms in his head. The Janitor has the skillset to clean anything...even a dead body, wiping away any trace of a will or clues to what a lowly townsperson's role is. The Janitor is offered a choice. Use his skills for the good of the Mafia, or die. Anyone in their right mind would choose correctly. He grabs his mop, and his bucket, and follows The Godfather outside. Revenge is sweet, but not dirty. (credit)

You can choose a target to clean each Night. Your cleaning attempt will be successful if your target dies for any reason, including leaving the game. However, it is most common that the player dies by a member of the Mafia, as you can see who can potentially die that night.

Selecting Someone to Clean[]

Taking advantage of your cleanings[]

After you're Out of Cleanings[]