Edit
watch 01:13
Who is the Jester?
Do you like this video?
Play Sound 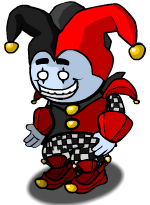 Detection Immunity
Attack: None (Unstoppable after lynch)
Defense: None

Randomizes who is haunted (if lynched)

Classic Results
Your target could be a Framer, Vampire, or Jester.

Coven Expansion Results
Your target could be a Framer, Vampire, Jester, or Hex Master.

Your target wants to be lynched. They must be a Jester.

You are a crazed lunatic whose life goal is to be publicly executed.

Trick the Town into voting against you.

If you are lynched you will attack one of your guilty or abstaining voters the following night with an Unstoppable attack.

Get yourself lynched by any means necessary.
A scarring past is how the jester became to be, born in the town of Salem. Once the jester became an adult, the jester was sent away from being conscripted as a soldier to fight in a bloody war. After years in the battlefield, the sight of his fellow soldiers dying, and along with the war experience had left him paranoid. The jester’s paranoia never went away and remained with him for years after when he was sent back to his hometown, Salem. Everyday, the jester experienced his traumatic memories of the battlefield, and twisted envisions that everyone in town is out to kill him. The memories of the traumatic experience and the fear that comes with it, makes it hard for the jester to bear to live, and would rather accept to be killed and be liberated from himself, than to live with his paranoia, making him become a target wanting to be lynched. (credit)

Use an older version of the game[]

Mafia having the Majority[]

# has revealed themself as the Mayor![]

Staying silent, misspelling "I am blackmailed."[]

Claiming you were attacked[]

Declare you are going Away From Keyboard (AFK)[]

Voting against the Town[]

Telling everyone to whisper you their roles[]

Voting innocent on a known target[]

Strategy for other roles[]

Scumreading is a common set of techniques or senses used to determine whether someone is evil or good. Purposely go along with the characteristics of an evil people had in mind could probably frame yourself to be lynched on spot. This strategy may work better at higher level play, as these are common loopholes in scum's behavior and often noticeable by experienced player, but can sometimes be unnoticed by newer players.

Appearing as a Hex Master[]