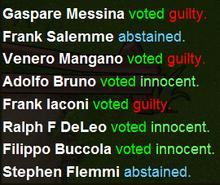 Lynching is an action that can be performed by anyone during the Voting phase of the game. It involves a player being voted onto the gallows and then being voted as to whether they are

. Lynching is a crucial element towards the end of the game, especially if Pestilence has spawned or all Town Killing roles are dead.

The process of Lynching[]

If the majority of voters voted guilty, the accused is given a few more seconds to express any last words before being lynched. Other players may not talk during this time, only whisper. Blackmailed players cannot give last words. Afterwards, the target will die, regardless of Defense. Then, the game goes through the usual process of revealing said player's Last Will and role. The Day ends.

If the majority of voters voted innocent, or a tie occurs, the Day will not end. The Voting phase will continue with the time remaining from before. You can have up to 3 trials before the Day ends automatically. These trials can have any 3 players voted up, even if it's the same player.

Things for Townies to consider before and during lynching[]

Lynching can be a great decision or a disastrous one for any faction. Any player needs to give careful thought about who to lynch based on the evidence available.

These are some of the questions that you may have to consider when someone is being voted to be lynched. Always be critical at the start of the game in your assessment, as chances are a lynch in the first or second round won't include a lot of evidence. Sometimes, unconsidered voting turns into random lynching and players can be killed in the first or second trials. If you are very unsure about the decision to hang them, then abstain (don't vote) or just click innocent. Assessing who needs lynching and who doesn't is a hard thing to do, and you may have it wrong sometimes, but knowing who to lynch is a skill that needs to be developed over time.

Drawing yourself out of the gallows is easier said than done, and requires a good deal of deception or intuition.

Lynching is an essential part of the main two Neutral roles, Jester and Executioner roles, and towards the end of the game, it can be an important part of how the members of the Mafia win. A Jester's entire existence revolves around trying to be lynched, and it is an achievement for any Jester to have themselves lynched, as it involves a great deal of deception. Similarly, the Executioner has to try and have their target (which is always a Townie or a Townie converted to become a Vampire, but never the Jailor or Mayor) lynched, sometimes on very little evidence, which can be tricky. Here are some points for the Neutral and Mafia roles to consider when using lynching:

Bugs and technical problems in the Lynching System[]