Edit
watch 01:56
Who is the Mafioso?
Do you like this video?
Play Sound 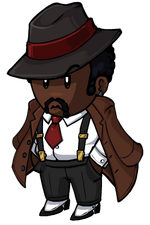 Control Immunity (with the Godfather)

Your target could be a Vigilante, Veteran, Mafioso, or Ambusher.

Coven Expansion Results
Your target could be a Vigilante, Veteran, Mafioso, Pirate, or Ambusher.

Your target does the Godfather's dirty work. They must be a Mafioso.

You are a member of organized crime, trying to work your way to the top.

Carry out the Godfather's orders.

Kill anyone that will not submit to the Mafia.
Obey. That was the only word he understood. Though he may seem like your average everyday townie, the story behind his grin is a grim, horrible and ghastly tale. That man is only known as the Mafioso. He dreams of only one thing; a brighter future for his whole family, especially for his beloved Godfather. Just to achieve that dream, he will murder anyone his Godfather wishes. Whether it be the Mayor that once stood in the Godfather's way, an Investigator who tracked down the Arsonist, or even a Werewolf who killed the Survivor that promised to stand by his side... he just doesn't care. Anyone who isn't on his side is deemed an enemy to the Mafia. But... what if the Godfather was killed? Well... let's just say a replacement is already waiting. (credit)

In the Town, you are the main enemy. You will most likely not be sided with over a Neutral Killing if a Townie or Survivor is forced to pick between you and them in a 1 v 1 v 1 situation. Therefore, you need to know which people to kill.

This role can kill all of the Mafia, including the Godfather unless there are four of you. This also role blocks you, making it potentially the most dangerous role to face. The Jailor will also be very hard to lynch, and can sometimes attract the attention of Town Protective roles, Lookouts, Transporters, and roles that Rampage. Be careful of killing this role and other Town Investigative roles as this might out your claim, or make your claim look suspicious.

They can either call you out or paralyze the Mafia. A Pirate is far less dangerous as they can side with you, but if they want to side with another role they could potentially call you out as a sign of alliance.

If kept until late game, this role can potentially turn the tides on the whole Mafia by countering "Mafia Majority". Try to take them out before it's too late.

These roles have the power to take out the vast majority of the Mafia in one fatal swoop. They are rather dangerous, but you can manage to trick them into killing themselves by hitting a Townie.

They have the capability of making you attack one of your own Mafia members, and can easily protect themselves. They will also win against you in a 1v1 situation. To take them out, try targeting someone who you think the Transporter will be transporting themselves with(Like a Survivor claim). You can also have the Ambusher safely kill them for you as the Ambusher can turn the Transporter's self protection against them by targeting them.

Vampires and the Coven[]

These are your main enemies in a battle for supremacy over the Town, and have a team to fall back on. They can also take out huge chunks of the Mafia, so take them out. Keep the balance though, as too many Townies can always spell trouble. These are easier to face in a Kingmaker situation, and so are less dangerous than Neutral Killing.

These roles can catch you red handed. The Sheriff may be valuable enough for mislynches if you have a Framer, but they can catch the Mafia anyways without a Disguiser so it's best to kill them off. Investigators can trap you in a box if asked to claim, so target them early.

These roles can stop you from killing higher priority targets, or potentially kill you. Take them out if you think they're on an important role.

These are either lethal or harmless depending on intelligence and information. You need them dead to win.

These aren't so dangerous, but they can side against you. Always keep this in mind. For Coven users, the Guardian Angel may be the only exception, as their target can be an enemy.