View source
watch 02:56
Raise a Floppa - The Loop
Do you like this video?
Play Sound 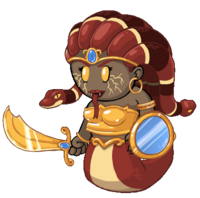 Detection Immunity (with the Necronomicon)
Attack: Powerful
Defense: None

Deal a Powerful attack to visitors

With the Necronomicon:
Deal a Powerful attack to target

Your target has a gaze of stone. They must be Medusa.

You are a snake haired monster with a gaze of stone.

You may choose to Stone Gaze all visitors at night.

You may choose to stone gaze thrice.
With the Necronomicon, you may visit players and turn them to stone.

Kill all who would oppose the Coven.
A blind old woman sits deadly still on an armchair, brushing a finger over the raised dots printed on the pages of her book.

An esteemed Medium, forced to quit the job due to vision problems. A normal introduction, yet from then on, the Town began labeling her with a moniker she would covertly despise: the “crazy lady”. Neighbors would complain about eerie hissing noises coming from inside her house late at night. Whisperings would link the woman to a number of disappearances which only began to surface after her arrival. Rumors would pop up claiming that the missing looked exactly like the terrifying marble statues on her garden, unwillingly protecting her abode. She knew someone would go out of their way again to approach her and uncloak the arising suspicion surrounding the circumstances.

The blunt Sheriff was standing on her porch, impatient and eager to ask a few questions. He was smart, he was concise, and his interrogations quickly led him to an undisputable conclusion: she was a member of that cult of witches, the Coven. A threat to tell the Town was all the Medusa could take. Unveiling a head of snakes and a monstrous visage, she forcefully gripped the Sheriff’s face in her cold, bony hands and glared into the helpless man’s soul. The enraged Medusa unleashed upon him all the pain she had ever went through, from a wretched birth, to the curse of Athena, up to now, a laughingstock shunned by society. Faltering not her immobilizing gaze until the once-famed deputy was now nothing more than a new addition to the Gorgon’s assortment of figurines.

A blind old woman sits deadly still on an armchair. Dare you look her in the eyes, and suffer a same fate?
(credit)