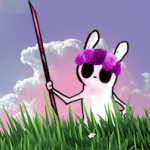 aka a little slugcat

ALSO. If you are to call me something, call me Slug or Slugkitty. Do NOT call me Kitty. Why? Because cats are spawns of the Devil. They are disgusting things that live to shred carpets and flummery all over a backyard. I should know; my neighborhood is overrun with those...things.

Role ideas that have the "Slug Seal of Approval":

STILL MAD THAT MANILA WAS ROBBED AND BOTH TRINITY AND MONET WON. LIKE BITCH WHAT THE FUCK?! Don't get me wrong, both queens were stunning, but bITCH MANILA SHOULD HAVE SNATCHED THE CROWN JSFKSDS

Some good lofi: scribe - untitled 9 4 o' clock I Still Don't Know Who I Am. wet season safe, now raindrops falling down Its All There