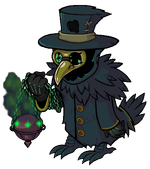 Becomes Pestilence when all alive players have been infected
Unique Role

Your target is a carrier of disease. They must be the Plaguebearer.

You are an acolyte of Pestilence who spreads disease among the town.

You may choose to infect a player with the Plague each night.

Players will not know they have been infected.
When all living players are infected you become Pestilence.

Screams rang through the cold night and the Doctor burst out of his house, barely just grabbing his medical kit as he raced along the streets. Arriving at the source of unrest, he discovered a young boy, lying down, coughing and sobbing. Instinct made the Doctor cover his face with his trusty mask, and he was right in doing so. A closer inspection revealed the alarming truth. The red rash, the hacking coughs, and the huge black boils that had risen on the pale skin… this boy had the plague.

The Doctor should have been scared, worried, horrified, he knew this, but instead, he felt... fascination. How quickly could this disease spread, how many people could it kill? Hastily he took a sample, and commanded the boy’s family to be quarantined. Then, he hurried home to test this intriguing sample further.

A week, and the Doctor finally held the result he was looking for. All he had to do was drop the solution on the path outside everyone’s houses, and the fumes would infect everyone who ventured there. He started to question himself, but then he remembered the other Doctor who always took the credit for himself, the Investigator who always snooped inside his house, the Jailor who roughly threw him in a cramped jail cell, and he felt better. Quickly and silently, the Doctor grabbed his solution and got to work.

Inhaling the sweet scents of the herbs he put in his mask, the Doctor infected person after person, using his dark robes to blend into the night. But on the fateful night that the plague spread to everyone in the Town, the evil Doctor realized its power. And as the moon was concealed under rolling grey clouds and the panicked screams rose from the town, Pestilence, Fourth Horseman of the Apocalypse, laughed so hard that tears rolled off his mask. (credit)

Becoming Pestilence, Horseman of the Apocalypse