Edit
watch 01:02
Who is the Spy?
Do you like this video?
Play Sound 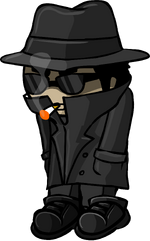 Classic Results
Your target could be a Spy, Blackmailer, or Jailor.

Coven Expansion Results
Your target could be a Spy, Blackmailer, Jailor, or Guardian Angel.

Your target secretly watches who someone visits. They must be a Spy.

You are a talented watcher who keeps track of evil in the Town.

You may bug a player's house to see what happens to them that night.

You will know who the Mafia and Coven visit each night.

Swift as the wind, the ex-ninja ran through the streets of Salem, entering a black forest. He dashed through the woods, graceful as a cheetah, until he saw a light ahead. He slowed down and expertly hid in a tree, silent as a thought. With the aid of his acute sense of hearing, he listened to the Mafia members discussing their future plans of terror and murder. The Spy clenched his hands, knowing that he could kill a man in thirty five different ways... but he couldn't. This was a group of armed men, and he was merely a weaponless man with some knowledge on killing. No - it would be better to let the town know who the perpetrators are, so that they could dispose of them instead.

In the daytime, those who he expected to die were lying on the ground, dispatched, in front of their houses. The Spy walked around, listening to everybody talk, knowing what everyone was whispering about. Using this information, he was able to judge who sounded like who... and who was part of the Mafia. (credit)

When a Spy uses their Night ability to bug someone, they'll see messages from the following list for appropriate events: