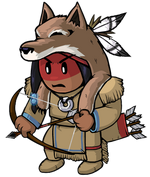 Coven Expansion Results
Your target could be a Investigator, Consigliere, Mayor, Tracker, or Plaguebearer.

Your target is skilled in the art of tracking. They must be a Tracker.

You are a skilled tracker who will follow their prey to any destination.

Track one person at night to see who they visit.

The Tracker had always been good at what he did. He grew up in a family of hunters, where he learned everything about how to stalk, how to pursue, and then how to act. Turns out that being cut off from people through his childhood ended up making him all the more dependent on people throughout his adulthood. There was always some noteworthy charisma that was imbued into him. Everyone gravitated around him. He also seemed to have his neck plastered with lipstick marks most days. Anyone’s guess as to why.

The Town needed somebody like this, a person who could gain trust and relentlessly pursue a target at the same time. The Tracker accepted this offer. He was willing to help out anybody who was in need of it.

His first night on the job was somewhat compromised. He opened his door to find a beautiful woman standing in front of him. A few drinks later and it was business as usual for The Tracker.

He soon grew suspicious of this woman, there had to be something more to the night than just that. He followed her for a few days and found that she was visiting someone new every single night. The Tracker slowly grew obsessed with this woman and stalked her every single night.

One day, he went back home, frustrated after intently watching this Escort and another man in bed. His rage remained until he found out his new obsession was dead by the cold blade of a deranged lunatic.

Anguish washed over him. He was desperate for revenge. He told everyone the next day about how he saw the Escort visit this man’s house the night before her untimely demise. Nobody questioned him; this was just the Tracker’s job. The accused was drenched in sweat as he felt all eyes on him. “I mean… th-this guy has it out for m-me” he murmured desperately. Then a rusty blade fell from his pocket. The Tracker was in prime position to finish its prey.

Retrieved from "https://town-of-salem.fandom.com/wiki/Tracker?oldid=536711"
Community content is available under CC-BY-SA unless otherwise noted.