View source
watch 01:06
What are Vampires?
Do you like this video?
Play Sound 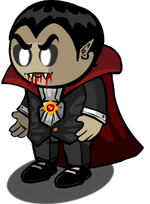 Attempt to convert the target. If the target cannot be converted or the faction is full, you will attack the target

Classic Results
Your target could be a Framer, Vampire, or Jester.

Coven Expansion Results
Your target could be a Framer, Vampire, Jester, or Hex Master.

Your target drinks blood. They must be a Vampire!

You are among the undead who want to turn others at night.

Convert others to Vampires at night.

Vampires vote at night to bite a target.
The youngest Vampire will visit the target at night.

Convert everyone who would oppose you.
She had never envisioned her life like this, and she never asked for it. One night, many moons ago she was bitten. Merely a Lookout at the time, she became much more ever since. To some it was a blessing, and to some, a curse; she hadn't decided yet. But she knew it was a full moon, and she knew that meant she needed to feast. Skulking through the alleys of Salem, the Vampire stumbled across the Escort, paying a visit to a nearby home. The Vampire felt bad for her, but she must feed. She lunged out at the Escort, reaching her prey before it even knew what was going on. Sucking the life out of her, she left the mangled, lifeless corpse in the alley. The Werewolf's howl could be heard in a nearby home, but that didn't concern her. She was really on the lookout for the Vampire Hunter, who reeked of garlic. He would be carrying his stakes and holy water, as the Vampires would be active this full moon, but it was for naught. The Hunter was too late to save the Escort, so soon enough he'd have another problem to worry about. She morphed into a bat and took off into the air, looking down on the town below. As the faint beams of the sun began to peek out, she looked down upon all the residents of Salem, her soon to be meals. (credit)

1 In addition, this role will kill the youngest Vampire.

2 If the Town Protective is a Bodyguard or Trapper, they will kill the youngest Vampire. Crusaders and Doctors will only prevent conversion along with other attacks. Other visitors can be attacked however by a Crusader.

3 If the immune target is Pestilence or a Werewolf staying home, they will kill the youngest Vampire. Other roles with Defense will only be notified that someone attacked them. Arsonists and the Plaguebearer will know who attacked them due to their passive ability.

M A Medusa who is using a Stone Gaze on the night they were bitten will die along with the youngest Vampire being Stoned.

How Vampires Affect Other Roles