Edit
watch 02:17
New Pokemon Games - The Loop
Do you like this video?
Play Sound 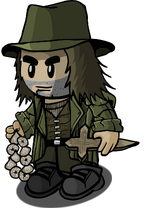 Can read Vampire Chat.
Counterattacks Vampires
becomes Vigilante when all Vampires are dead.

Classic Results
Your target could be a Survivor, Vampire Hunter, or Amnesiac.

Your target tracks Vampires. They must be a Vampire Hunter!

You will do whatever it takes to eliminate the Vampires.

Check for Vampires each night.

The Vampire Hunter was a normal person, just like everybody else. There had always been rumors of vampires, yet he did not believe in them.

One day, he heard reports of people acting strangely and being incredibly sensitive to light. He then started hearing about sudden disappearances and vampires taking over towns. At this point he knew that they must be real. There were so many townspeople, good people, whose lives were taken by force and turned into a race that seeks to feast on the blood of others. "If this continues, soon everyone will become a vampire. I must stop this!" he said to himself.

Others had tried to kill vampires with normal guns, yet they were converted before they could succeed. He vigorously studied the history of vampires, their weaknesses and strengths. Armed with a bag of garlic, some holy water, a wooden stake and a silver knife, he packed up and left his town, travelling to other towns that had been overtaken by vampires. He was determined to end the vampire bloodline, before it was too late. (credit)

Turning into a Vigilante[]