Edit
watch 02:26
Who is the Vigilante?
Do you like this video?
Play Sound 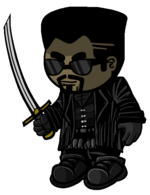 Suicide after killing a Town member

Your target could be a Vigilante, Veteran, Mafioso, or Ambusher.

Coven Expansion Results
Your target could be a Vigilante, Veteran, Mafioso, Pirate or Ambusher.

Your target will bend the law to enact justice. They must be a Vigilante.

You are a militant cop who takes the law into your own hands.

Choose to take justice into your own hands and shoot someone.

If you shoot another Town member you will commit suicide over the guilt.
You can only shoot your gun 3 times.

An ex-captain of the Salem militia is infuriated by the increase of crime on the streets – HIS streets!

Although the Vigilante was fired for his violent and rash methods of war, he still has a strong sense of justice, or so he tells himself. As the death toll in the Town rises, his anger only grows as he finds the killer's identity obvious. That night, he makes his final, heavy decision: If the law won't take down this fiend, he'll have to do it himself. He fishes the pistol out of the end table beside his bed, loading it with his two remaining bullets. One to kill, and one for backup. He usually doesn't miss, but it pays to be cautious.

Using the shadow of night as his disguise, he sneaks into the suspect's house to find him cleaning a bloody knife. "I knew it!" the Vigilante tells himself, his lips curling in disgust at the sight. Letting out a quiet, steady breath, he raises his gun and pulls the trigger. His target hits the floor, all signs of life disappearing from his now limp body. Pleased with the results, the Vigilante slips back into his home and climbs into bed. He sleeps soundly, feeling as if a heavy weight has been lifted from his shoulders.

The following morning, a panicked frenzy meets him in the square. The Doctor has been discovered dead in his home after performing surgery on a wounded patient. Nausea washes over him. He has killed a fellow Town member. Self-preservation pins his lips together during the day, and misery drags his feet back home that night. He finds his gun resting on the end table, just where he had left it after slaying an innocent soul. The weight returns, crashing down on him heavier than before. One bullet left. (credit)

Selecting Who to Shoot[]

When you shoot a Townie[]

When your target has Defense[]