Edit
watch 01:13
Who is the Werewolf?
Do you like this video?
Play Sound 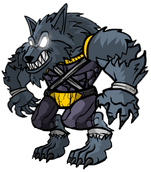 During a Full Moon:
Your target is suspicious!
On non-Full Moon Nights:
You cannot find evidence of wrongdoing. Your target seems innocent.

Your target howls at the moon. They must be a Werewolf.

You are a normal citizen who transforms during the full moon.

Transform into a Werewolf during the full moon.

You will Rampage at a player's house when you attack.
If you do not select a target you will stay home and Rampage at your home.

Kill everyone who would oppose you.
Rain pours and lightning flashes through the sky as a skinny teenage boy pushes open a wire gate to a dark trail surrounded by trees. He holds his books close to his chest, glancing around for danger. The boy hears footsteps behind him and spins around, but sees nothing but darkness. Turning around again, he bumps into three tall teenagers staring down at the him. They throw him to the ground, and throw his backpack and books across the wet grass. The boy wails for them to stop, but they don't listen. They kick him over and over, until one of them pulls him up by the shirt. He feels blood dripping down his face as he is thrown back towards the fence. His body is filled with fear, but rage as well; as he wipes the blood off of his face, he notices that his hand is covered in a thick layer of hair. A flash of lightning illuminating the night, the boy glances up at the sky: the full moon is caught in his gaze, and a loud howl escapes from his mouth. (credit)

The Werewolf is similar to the Serial Killer since both usually work alone and kill targets directly, but there are major differences:

Behavior with other roles[]